What Is The Role Of Mouthguards In Treating Sleep Apnea?

Sleep apnea is a condition in which breathing stops for about 10 seconds about 15 times an hour during sleep. It may be surprising how common this ailment is. The Public Health Agency of Canada’s 2009 Sleep Apnea Rapid Response Questionnaire, conducted by Statistics Canada, found that “over one in four Canadian adults (26 per cent) was at high risk for having obstructive sleep apnea based on the presence of three or more of seven risk factors/symptoms..” 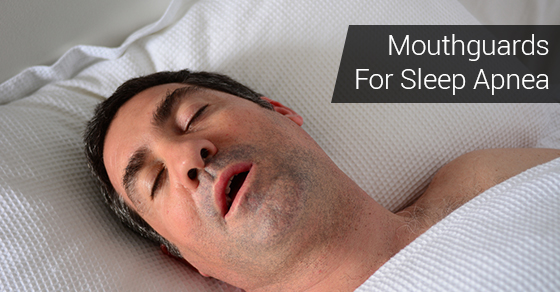 What happens when I have sleep apnea?

When you’re awake and in control of your body, your throat muscles are kept stiff and open so air flows freely into your lungs. When you sleep, the muscles become lax and that narrows the throat passage. Under normal circumstances, this passage is quite adequate for normal breathing. But if you have some anatomical irregularities, such as a large tongue and tonsils, a certain shape of head and neck, you’re overweight with extra soft fat tissue that thickens the wall of the windpipe or your throat muscles and tongue relax too much, the throat passage gets blocked, causing sleep apnea.

Many people may not even know they have sleep apnea, especially those that sleep alone. One of the most common symptoms of obstructive sleep apnea is loud and persistent snoring, followed by pauses, and then choking or gasping. But the person does not usually even wake up or remember the troublesome sleep the next morning, so if they are not sharing their sleeping quarters with anyone, this disease goes undetected. And that’s unfortunate, because sleep apnea does have adverse effects on one’s health.

How does sleep apnea affect my health?

Since not enough air flows into the lungs, there is a drop in oxygen, and this triggers the brain to disturb the sleep, so the person can resume normal breathing. So, if you do suffer from sleep apnea, in addition to always feeling tired and frazzled because of lack of deep sleep, the frequent drops in your blood oxygen can cause your stress hormone levels to rise and put your cardiovascular health at risk. Sleep apnea often leads to such conditions as high blood pressure, arrhythmia and even heart attack and stroke. Untreated sleep apnea is a life-shortening condition!

What help is there for those suffering from sleep apnea?

Although there is no medication for this condition, and surgery is used in extreme cases only, there are devices available to treat sleep apnea. These devices either provide additional air (oxygen) or reposition the lower jaw which gently guides the airway to be more open allowing more air to be breathed, and relieve symptoms such as loud snoring and daytime sleepiness.

One such device is a sleep appliance. A dentist or an orthodontist can make this plastic mouthpiece for you specifically after a sleep study is done to confirm sleep apnea. According to the U.S. National Heart, Lung and Blood Institute, this device is effective with mild cases of sleep apnea and loud snoring. This device looks like a sports mouthguard (there are a variety of designs), and is designed to connect to the upper and lower dental arches and move your jaw forward for better breathing.

Generally speaking, a mouthguard does help in cases of mild or even moderate sleep apnea. However, whether or not you can use a mouthguard to help you with your sleep apnea should only be decided by your health provider. Your doctor will evaluate the severity of your particular case, and give you an knowledgeable recommendation specific to your situation.