Why Does Sleep Apnea Occur?

Sleep apnea is a disorder marked by repeated pauses in breathing or the taking of shallow breaths while you’re asleep. Apnea is the period of time when your breathing is reduced or stops. It can happen anywhere from a few seconds to whole minutes. When breathing resumes it is usually with a snort or choking noise. Sleep apnea is common, chronic, and it often remains untreated. 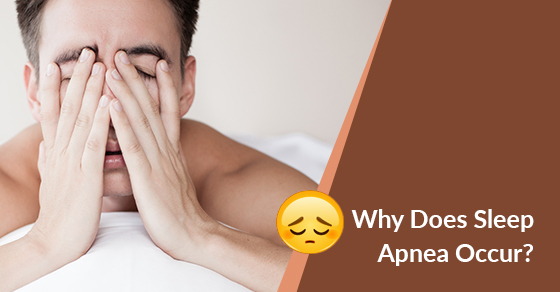 Why does sleep apnea occur?

As we sleep, our brain gives our breathing muscles instructions so these muscles know to take a breath. When our brain doesn’t send a signal to the muscles to breathe, it is known as central sleep apnea (CSA). When the brain does send the signal but there is a block in airflow from a collapse of the muscles in the back of the throat, this is referred to as obstructive sleep apnea (OSA). Some people even suffer from a combination of the two, which is known as mixed sleep apnea. The pauses in breathing that occur when your brain doesn’t send signals to the muscles or there is an obstruction of the throat can cause you to wake up suddenly gasping for air several times during the night. However, these awakenings are usually so brief that you don’t notice them.

What are the symptoms?

Sleep apnea has various symptoms that come out during the night and day. For instance, if you suffer from sleep apnea you may snore loudly and be subjected to breathing pauses and gasping while you sleep. You may also wake up suddenly with shortness of breath. People with sleep apnea often wake up with dry mouth, a sore throat and morning headaches. Furthermore, they will find themselves experiencing fatigue, difficulty concentrating and extreme sleepiness as they try to get through their day.

What are the available treatments for sleep apnea?

The treatment depends on the severity of your symptoms. Mild sleep apnea requires lifestyle changes such as weight loss, smoking cessation, side sleeping and avoidance of alcohol. For those that are not overweight and do not smoke or drink, oral appliances are available to hold the jaw and tongue in a forward position allowing for better breathing.

For moderate to severe obstructive sleep apnea, there is a device knowns as a CPAP machine. This machine emits a stream of compressed air through a hose attached to a mask worn over the nose. The compression helps keep the airways open allowing for unobstructed airflow. Severe cases of sleep apnea require surgery on the specific area that is causing the obstruction like the throat muscles.

If you think you have sleep apnea, visit your doctor. There are tests that can be performed to determine if you do indeed have it and what the best course of action is to treat it.