Have You Ever Wondered How A
Beautiful Smile
Could Enhance Your Looks?
Request Information Request Appointment 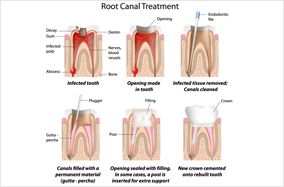 Sadly root canals have had bad press over the years. However in Dr. Silberman’s office he would prefer one to think of a root canal as a special filling- nothing more.

Why are root canals sometimes necessary? Root canal treatment is necessary for a variety of reasons. For example when untreated tooth decay progresses toward the interior of the tooth –once the decay touches the nerve- the nerve is considered infected and treatment is necessary. Usually the patient has a clue that something is wrong as the tooth becomes progressively more sensitive as the decay comes closer to nerve. If the infection becomes severe enough the patient can have severe pain and even facial swelling. The need for treatment becomes emergency status. Sometimes the nerve in a tooth can die due to trauma. The trauma can be acute such as a blow from a fall or the trauma can be chronic such as a history of multiple large or deep fillings on the tooth. The nerve, for reasons science cannot explain exactly, becomes non vital and this situation often leads to an infection, requiring root canal therapy.

What is a root canal? Every tooth has a core or chamber in the middle of the tooth which is where the nerve can be found. Some teeth have one nerve, others two, three or even four nerves in some teeth. When, as described above, it is determined that the nerve must be treated, the area of the nerve has to be cleaned and disinfected of all diseased tissue. The tooth is carefully anesthetized and using special instruments the diseased area is cleaned and filled with a rubber like material. The tooth and root remain intact. A good comparison is an attempt to remove the lead from a pencil and fill that space with an artificial substance; the pencil stays the same and essentially looks as before. Root canal therapy is somewhat time consuming but should generally not be painful at all.

The extent of the damage to the tooth determines what kind of filling or restoration is required after root canal therapy. If the damage is minimal a simple filling is done after a root canal. Commonly the damage is more severe so a crown (or cap: they are the same) preserves the tooth for years to come.