How Sleep Apnea Can Lead To Weight Gain

Anyone suffering from sleep apnea knows that it is not just the poor sleep you have to deal with, it’s the added stress that comes with it, the feelings of hopelessness, often elevations in blood pressure, and feeling like a zombie the next day. But sleep apnea can also have an effect on your weight. If you are worried about recent weight gains, and you are someone suffering from sleep apnea, your lack of sleep may be to blame. Below are some of the ways that sleep apnea has been linked to weight gain. 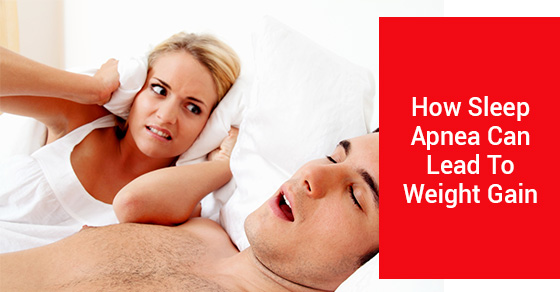 When people don’t sleep, their hormones become imbalanced, particularly the hormones that control hunger, appetite, and blood sugar levels. When you don’t sleep well, you are more likely to feel hungry than normal and end up eating more because of it. Your body will also be craving energy rich food, like carbs.

The hormone imbalance is a two-pronged attack. First, it creates feelings of hunger, and then, once you have eaten, your decreased insulin levels make it harder for your body to handle the intake of sugar and carbs, meaning that your body is going to store this food as fat. Decreased sleep also compounds the weight gain because it increases the cortisol levels in your body. Increases in cortisol are linked to decreases in insulin levels.

Sleep apnea is cruel. There are two common types of sleep apnea, that caused by excess tissue in the throat due to obesity and that caused by signalling from the brain. Both end up disrupting the sufferer’s breathing for between ten and twenty seconds at a time, often hundreds of times per night, which can leave you waking up, gasping for air.

Sleep apnea, while a minor inconvenience for some, can be life altering for others. If you are someone that does not have a high metabolism, sleep apnea can exacerbate your tendency to gain weight, adding yet another stressor to your life and compounding the effect that it has on your overall health. If you are worried about recent weight gains and don’t know what to attribute it to, it might just be your sleep apnea.