5 Foods To Avoid After A Teeth Whitening 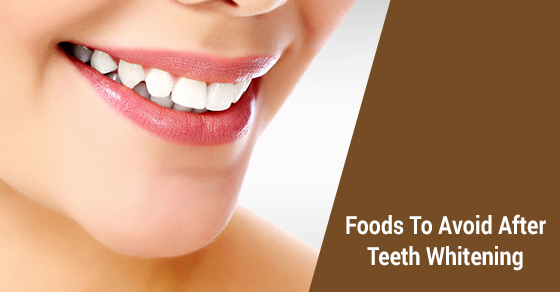 Once you’ve had your teeth whitened, you’ll want to do all you can to prevent future stains and discolouration, and keep your teeth white and bright for as long as possible. There are some hard and fast aftercare rules for the first 24 hours after teeth whitening, including avoiding staining drinks, like pop, coffee and red wine, not smoking, and not using coloured toothpaste or mouthwash. It is also important to avoid staining foods. A good rule of thumb is to avoid any food or drink that would stain white fabric. Below are some foods to avoid after teeth whitening.

The longer you can hold off on the above foods after a teeth whitening, the longer your white smile will last! However, it’s absolutely necessary to avoid them in the first 24 to 48 hour period after your whitening, as your teeth will be extra sensitive.

There are plenty of foods and drinks that are fine to consume after whitening (so you don’t go hungry!). Skinless white meat, white fish and egg whites are okay to eat, as well as rice, pasta, bread, white cheese and bananas. To drink, still or sparkling water, milk and coconut water are fine. If you would like an alcoholic beverage, make sure it is a clear alcohol with a clear mix, like a gin and tonic.

Be sure to ask your dentist after your whitening to get a full list of post-whitening do’s and don’t’s!