Can Sleep Apnea Increase The Risk Of Stroke?

Sleep apnea is a dyssomnia (sleep disorder) that affects our breathing. People afflicted with sleep apnea experience pauses in breathing and shallow breathing while they sleep. These moments of apnea (pauses) can last anywhere from a few seconds to several minutes. 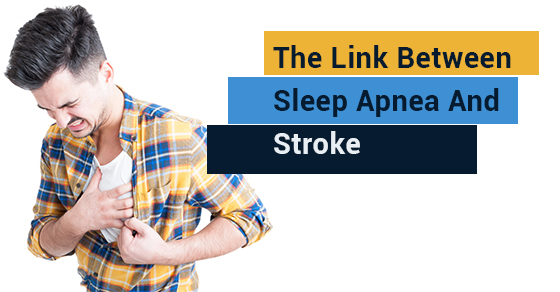 The dangers of sleep apnea

Sleep apnea is linked to heart disease, diabetes, high blood pressure and more recently, studies have shown that it is also connected to strokes. It usually starts mildly and manifests itself in the form of heavy snoring. As it progresses, the apnea takes hold, and besides the shallow and pause-filled nighttime breathing many people find it hard to stay awake during the day. On top of the aforementioned dangers, people with sleep apnea run the risk of losing consciousness during extended breathing pauses.

The link between sleep apnea and strokes

An ongoing study called the Sleep Heart Health Study, followed 2,462 men and 2,960 women who suffer from sleep apnea for approximately nine years. Data from this study shows that 193 participants suffered strokes; 85 of them were men while 103 of them were women. The study also found that people with sleep apnea had a doubly increased risk of stroke compared to those who don’t have sleep apnea. Furthermore, the study determined that people with severe obstructive sleep apnea had a tripled chance of having a stroke.

Who is more at risk, men or women?

About 15 million strokes occur worldwide each year. Approximately one third of those strokes are fatal. Although more women in the study had strokes, researchers claim that men may be more at risk because they are known to develop sleep apnea at younger ages. Because men can become afflicted with sleep apnea earlier, they allow it to remain untreated for longer; thus, increasing their risk of strokes.

How can people with sleep apnea diminish their risk of strokes?

Treatments are available for sleep apnea. If you are plagued with sleep apnea your doctor can recommend a CPAP machine. This continuous positive airway pressure device helps eliminates breathing pauses while you sleep. For less severe cases of sleep apnea, oral-breathing devices like nasal dilators can be worn at night. In some instances people have undergone surgery to treat sleep apnea or made extreme lifestyle changes like major weight loss and quitting smoking.

If you think you suffer from sleep apnea, get it treated right away.